Remembering the Victims of Hiroshima & Nagasaki

On 5 August 2016, the Atomic Bomb Awareness Day, or GENBAKU NO-HI, event took place in the Rotunda of the Vienna International Centre to commemorate the victims of the Hiroshima and Nagasaki nuclear bombings that occurred on 6 and 9 August 1945.

While casualty figures vary greatly, in Hiroshima it is estimated some 90,000 to 166,000 people died within the first four months, while in Nagasaki the immediate deaths range from 60,000 to 80,000, according to the U.S.-Japanese Radiation Effects Research Foundation.

"The bombing of Hiroshima and Nagasaki are a reminder of what horrors nuclear weapons can inflict."CTBTO Executive Secretary Lassina Zerbo

Alissa Jachs from A Voice for Youth addresses the audience.

“It is clear to me that we cannot forget the devastating consequences of nuclear weapons use and testing,’ Jean du Preez, CTBTO Chief, External Relations, Protocol and International Cooperation, told those attending the Vienna commemorations. “ Just as the atomic bomb survivors, the Hibakusha,  remind us that “never again” should nuclear weapons be used, we need to also ensure that never again will nuclear testing occur,” he said.

While 400-500 nuclear explosions were carried out in each of the previous decades between the dawn of the atomic age and the opening for signature of the Comprehensive Nuclear-Test-Ban Treaty (CTBT) in September 1996, there have only been four tests this millennium. “This remarkable achievement was only possible because of the CTBT,” du Preez said.  [Read the full speech here]

Addressing the audience, eighteen year old student, Alissa Jachs, said it was important youth were engaged on issues of nuclear non-proliferation and disarmament.

“I’m here to tell you that we are motivated to take action in the nuclear disarmament negotiations. We are ready to participate, to speak up and be part of a growing movement,” Jachs said.

“The catastrophic consequences of nuclear testing are well known. We have seen them, read about them and, even worse, many have suffered from them. Let’s bring the CTBT into force. We owe it to ourselves and our future generations,” Jean du Preez, CTBTO Chief, External Relations, Protocol and International Cooperation

Mr Ichitomo Taninai, Counsellor Permanent Mission of Japan to the International Organizations in Vienna, emphasised the importance of international cooperation to nuclear disarmament and non-proliferation.

“Japan continues to work with all countries in the world to promote realistic and practical measures for nuclear disarmament and non-proliferation…[including] promoting of the entry into force of the CTBT,” Taninai said.

The test site after detonation: a crater of fused soil, also known as “Trinite” radiates from ground zero.

On 16 July 1945, U.S. scientists working on the Manhattan Project successfully detonated the first-ever nuclear explosion in the ‘Trinity’ test at Alamogordo, New Mexico.

Three weeks later, on 6 August 1945, the first bomb, code-named ‘Little Boy’, was dropped on the city of Hiroshima. It had an explosive yield of around 13 kilotons and at the moment of detonation, a fireball was generated that raised temperatures to 4,000 degrees Celsius, turning Hiroshima – where many buildings were made of wood and paper - into an inferno. The blast created shock waves faster than the speed of sound.

Nagasaki before and after.

After the blast, those who approached ground zero searching for the missing were exposed to radiation. Black rain, containing large amounts of radioactive fallout, caused widespread contamination.

Three days later, on the morning of 9 August, a second nuclear bomb, code-named ‘Fat Man’, yielding 21 kilotons was prepared for detonation. The primary target had been the city of Kokura. However due to a thick layer of clouds, the airplane’s crew reverted to the secondary target -- Nagasaki.

Over 2,000 nuclear tests were carried out after 1945 by different countries. They aided the proliferation of nuclear weapons and helped to develop weapons orders of magnitude more destructive than the Hiroshima and Nagasaki bombs.

With nuclear testing, countries can develop even more powerful nuclear weapons. The CTBT bans all nuclear testing. At the CTBTO, we stand ready to implement this Treaty.CTBTO Executive Secretary Lassina Zerbo

Following decades of public campaigning and multilateral negotiations, the Comprehensive Nuclear-Test-Ban Treaty (CTBT) was opened for signature in 1996. It bans all nuclear explosions.

A verification regime is being built to monitor compliance with the Treaty. The CTBTO's global monitoring network now comprises 300 stations, some in the most remote and inaccessible areas of the Earth and sea. The network captures four types of data: seismic, hydroacoustic, infrasound and radionuclide. It is about 90 percent complete. When finished, the system will have 337 stations placed globally to monitor every corner of the planet effectively. The system swiftly, reliably and precisely detected all DPRK’s declared nuclear tests. The Treaty will enter into force once signed and ratified by the remaining eight nuclear technology holder countries: China, Egypt, the DPRK, India, Iran, Israel, Pakistan and the United States. 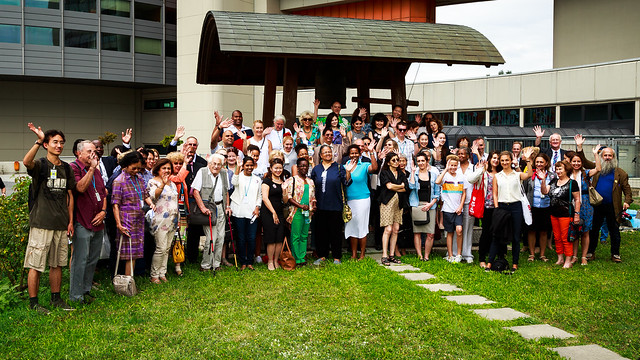