On 4 September, CTBTO Executive Secretary Lassina Zerbo travelled to Bled, Slovenia to participate in the annual Bled Strategic Forum, a leading conference in Central and South East Europe which provides a high-level platform for discussion of pressing regional and global issues. This year’s conference, entitled "New Reality", was the 12th Bled Strategic Forum and took place on 4-5 September 2017.

On 4 September, Zerbo met with a number of high-level participants including Karl Erjavec, Minister of Foreign Affairs of Slovenia, Miroslav Laják, Minister of Foreign & European Affairs of Slovakia (and President-Elect of the 72nd United Nations General Assembly), and Federica Mogherini, High Representative of the European Union for Foreign Affairs and Security Policy. Following the 3 September nuclear test by the DPRK, Mogherini issued a statement which stressed that the event “represents a major provocation, a grave threat to regional and international security and a major challenge to the global non-proliferation regime”.  In her keynote speech to the 2017 Bled Strategic Forum, Mogherini praised Zerbo’s leadership and noted her plans to discuss “how we can strengthen the multilateral non-proliferation regime worldwide because we will always choose the co-operative, multilateral way.”

The Democratic People's Republic of Korea (DPRK) has carried out another nuclear test. This is once again a direct and unacceptable violation of the DPRK's international obligations not to produce or test nuclear weapons, as determined by multiple United Nations Security Council Resolutions, and represents a major provocation, a grave threat to regional and international security and a major challenge to the global non-proliferation regime.
Federica MogheriniHigh Representative of the Union for Foreign Affairs and Security Policy

On 5 September, Zerbo participated in the high-level panel discussion entitled “Global nuclear governance: Quo vadis?”, which addressed issues and implications of the new global security situation. Panellists stressed the need for urgent attention to global nuclear governance, including a renewed focus on the role of multilateral treaties such as the NPT and the CTBT. Other distinguished panellists included:  Yukiya Amano, Director General of the International Atomic Energy Agency (IAEA); Yerzhan Ashikbayev, Deputy Minister of Foreign Affairs of the Republic of Kazakhstan; Jacek Bylica, European External Action Service (EEAS) Principal Adviser and Special Envoy for Non-proliferation and Disarmament; Rose E. Gottemoeller, Deputy Secretary-General of North Atlantic Treaty Organization (NATO); and Enna Park, Ambassador for Public Diplomacy at the Ministry of Foreign Affairs of the Republic of Korea.  The panel was moderated by Jure Kosec, an Independent Journalist at Delo, Slovenia. In his remarks vis-a-vis global nuclear governance, Zerbo stressed the urgency to focus on our common interests and shared vision – a sustainable, developed, and prosperous world without nuclear weapons. Zerbo furthermore proposed that the international community must focus on identifying realistic steps on that path that can bring opposing views together. Zerbo reiterated that the CTBT is a low-hanging fruit that should be grabbed as entry into force of the CTBT is a realizable target that would be a game changer in global nuclear governance. In light of recent events, Zerbo also noted that the latest announced nuclear test by the Democratic People’s Republic of Korea (DPRK) has again proved that the CTBTO’s International Monitoring System (IMS) is ready and working to detect nuclear tests 24/7.

The latest nuclear test has proved that the CTBTO’s International Monitoring System is ready and working.
Lassina ZerboCTBTO Executive Secretary 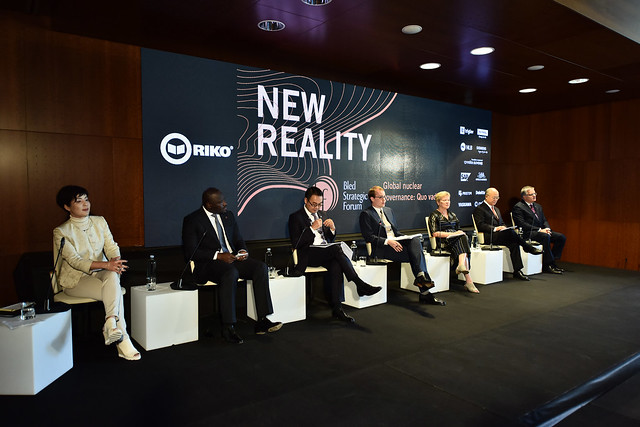