On 24 September, UN Secretary-General Ban Ki-moon opened a Meeting of Foreign Ministers to promote the early entry into force of the Comprehensive Nuclear-Test-Ban Treaty (CTBT), giving a statement.

Such meetings have taken place every alternate year since 2002 at the “Friends of the CTBT” Foreign Ministers’ Meeting.

Read the 4th Joint Ministerial Statement on the CTBT.

“The Treaty’s entry into force would be a major step in our effort to build a safer, more peaceful world. It would outlaw all nuclear tests and move us towards the larger goals of ridding the world of nuclear weapons and preventing their proliferation.”

These were the words of United Nations Secretary-General Ban Ki-moon as he opened the Fourth Ministerial Meeting in support of the Comprehensive Nuclear-Test-Ban Treaty's (CTBT) entry into force at the U.N. headquarters in New York on 24 September. Ban Ki-moon also highlighted his personal attachment to that objective, having served as chairman of the Preparatory Commission of the Comprehensive Nuclear-Test-Ban-Treaty Organization (CTBTO) in 1999.

Testing nuclear devices is a clear threat. Twenty years after the end of the Cold War the language of threat is no longer the language we want to speak.
Austria’s Foreign Minister Ursula Plassnik

The meeting was addressed by former U.S. Defense Secretary William Perry and U.N. Messenger of Peace and actor Michael Douglas, who both underscored their support for the CTBT's early entry into force.

Douglas, who spoke as a "citizen of the planet", emphasized that “There is no need to test nuclear weapons. It is imperative that the CTBT can come into force, including in my own country the United States.”

Many speakers highlighted the crucial role of the United States in the process of entry into force of the CTBT. As Maxime Verhagen, Foreign Minister of the Netherlands, stated “Ratification by such a key Annex 2 state would be an important turning point.”

I sincerely hope that the United States will decide to ratify the Treaty in the foreseeable future.
Maxime Verhagen, Foreign Minister of the Netherlands

The positions of the U.S. presidential candidates on the issue were carefully noted: U.S. Republican nominee, John McCain, has pledged to have another look at the Treaty, while U.S. Democratic Party nominee, Barack Obama, is outright supportive. In fact, on same the day as the meeting, Obama reiterated his intention not only to strive for U.S. ratification of the Treaty but also to persuade other countries whose ratification is a precondition for entry into force, such as India and Pakistan, to ratify.

Just as I will work with the US Senate to secure ratification of the CTBT at the earliest practical date, I will prioritise diplomatic efforts with India and Pakistan to encourage them to move beyond their moratorium on nuclear testing toward the ratification of the treaty.
Barack Obama, U.S. Democratic Party nominee

William Perry and other former U.S. foreign affairs and security policy leaders - George Shultz, Henry Kissinger and Sam Nunn, supported by more than 40 others – have injected new momentum into the discussion in the USA by calling for the CTBT's ratification from a bipartisan platform.

India's role in the Treaty's entry into force was also highlighted. As Germany’s Foreign Minister Frank-Walter Steinmeier noted “India, whose accession to the CTBT would bring the Treaty a further, very important step closer to entry into force, expressly confirmed its test moratorium just a few days ago.”

Only nine countries must ratify for entry into force

From a list of 44 countries listed in an Annex of the Treaty, nine have yet to ratify for the Treaty to enter into force: China, Democratic People’s Republic of Korea (DPRK), Egypt, India, Indonesia, Iran, Israel, Pakistan and the United States.

More countries than ever have endorsed the appeal

Around 40 Foreign Ministers from countries particularly attached to entry into force of the CTBT participated in the meeting. These ministers launched a joint appeal, the Joint Ministerial Statement, to the nine countries that have yet to ratify for the Treaty to enter into force. By Friday 26 September, around 80 countries had endorsed the Joint Ministerial Statement - the highest number to have ever supported such a statement, clearly reflecting the increasing worldwide support for the CTBT.

Also the UN Secretary-General, in his capacity as Depositary of the Treaty, pledged to send a letter to these nine countries, urging them to sign and ratify as soon as possible.

We call upon all States that have not yet done so to sign and ratify the Treaty without delay, in particular those whose ratification is needed for its entry into force.
2008 CTBT Joint Ministerial Statement

Perry recalled the multiple false alarms of imminent nuclear strikes in his time as Secretary of Defense and asserted that “It is imperative to dismantle the deadly Cold War legacy.”  Perry and others underlined the importance of the CTBT for addressing the challenge of nuclear non-proliferation.

A nuclear bomb detonated in one of our cities would dwarf 9/11.
Former U.S. Defense Secretary William Perry

A concrete and practical measure

The CTBT’s value as a concrete and practical measure in strengthening the Nuclear Non-Proliferation Treaty (NPT), both in containing the proliferation of nuclear weapons as well as in curbing their further development, was stressed. In the words of Maxime Verhagen: “The CTBT is a vital link in the system of mutually reinforcing disarmament and non-proliferation treaties, arrangements and regimes...It is crucial for bringing the 2010 NPT review conference to a successful outcome.

Convinced that the CTBT can be verified effectively

Perry explained that as early as 1996, before the CTBT opened for signature, the United States had conducted a comprehensive study on whether the CTBT could be verified effectively. The U.S. government was already convinced then that this could be accomplished. Today, the verification system is far superior than was foreseen in 1996.

The value of the global component of the verification system was shown when it provided critical information about the DPRK nuclear test in October 2006
Stephen Smith, Australia’s Foreign Minister

An international one billion dollar undertaking

CTBTO Executive Secretary, Tibor Tóth, explained that the CTBT's verification system is a “one billion dollar undertaking, embodying ten thousand person years of scientific and human endeavour." The system will comprise 337 state-of-the-art measuring facilities around the globe that transmit data in almost real-time.

Protect human health and the environment

According to Douglas: “The over 2000 nuclear tests conducted in the four decades before the CTBT was opened for signature were a clear threat not only to peace and security, but also to human health and the environment.” A legally binding ban on nuclear testing would address also these risks of nuclear explosions.

The over 2000 nuclear tests conducted in the four decades before the CTBT was opened for signature were a clear a threat not only to peace and security, but also to human health and the environment.
UN Messenger of Peace Michael Douglas

Other benefits of CTBT data

As was noted in the Joint Ministerial Statement and in many interventions, the measuring data from the CTBT’s monitoring facilities, of which two-thirds have already been established and are operating on a provisional basis, are of great value to the CTBT’s Member States not only for verifying the Treaty, but also for a multitude of scientific and civil applications.

As Douglas noted, the monitoring stations of the verification system “pick up almost every movement on earth – earthquakes, volcanoes, tsunamis, and even mine explosions. This data can be used for many different purposes, such as tsunami warning; research on the earth’s core; monitoring of earthquake and volcanoes; research on oceans, and climate change research – all benefiting the global environment.”

Special thanks to the Global Security Institute

The CTBTO is particulary grateful to the Global Security Institute and its President Jonathan Granoff for their valuable assistance in the organization of the meeting. 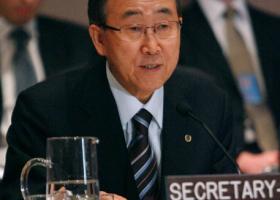 The 2008 CTBT Ministerial Meeting - A message of hope and peace

The 2008 CTBT Ministerial Meeting - A message of hope and peace 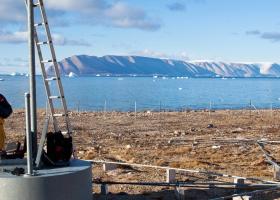