The Comprehensive Nuclear-Test-Ban Treaty Organization’s (CTBTO) unique global monitoring system, which will include 337 facilities once complete, is designed to detect nuclear explosions anywhere on Earth. This state-of-the-art network can also identify earthquakes or other seismic events that could cause a tsunami.

The data is recorded by 164 seismic and hydroacoustic stations that monitor underground and the oceans round-the-clock, using cutting-edge technologies.

This data is then transmitted in near real-time to National Tsunami Warning Centres (NTWC) of Member States to help them issue more timely and precise public alerts -- saving more lives and minimizing risk.

At the national level, each country is responsible for issuing its own public warning through their NTWC or designated authorities.

At present, 20 warning centres in 19 countries, which are Treaty signatories*, have signed a Tsunami Warning Agreement with the CTBTO, most recently, Honduras in September 2022.

The CTBTO’s data has proven to be more reliable and speedier than data from some other sources, with up to three minutes lead-time, prompting tsunami alerts that can potentially save more lives.

For instance, the CTBTO’s monitoring stations contributed to rapid alerts issued by tsunami warning centres in the Pacific region after Japan’s devastating earthquake in 2011. The centres issued swift alerts to Japan’s neighbours, as well as to the wider Pacific region.

The CTBTO and the Intergovernmental Oceanographic Commission (IOC) of the United Nations Educational, Scientific and Cultural Organization (UNESCO) agreed to share efforts and data in the field of tsunami early warning systems following the 2004 Indian Ocean tsunami that killed more than 230,000 people.

Since the beginning of this partnership, it has fallen within the remit of UNESCO to approve and recognise the national tsunami warning organizations that are designated by CTBTO’s Member States.

At the time of signing the 2010 agreement with the CTBTO, the then Director-General of UNESCO, Irina Bokova, noted that “besides [its] importance in disaster mitigation, the data received by the CTBTO from its global network of monitoring stations can advance research on ocean processes and marine life and contribute to sustainable development.”

According to UNESCO, over the past century, “58 tsunamis have claimed more than 260,000 lives, surpassing any other natural hazard. More are expected in the future as the sea-level rises due to climate change.” 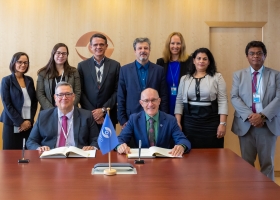 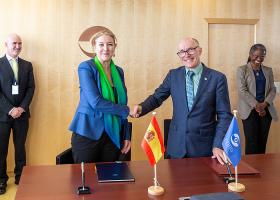