The CTBTO is in the process of elaborating procedures for the implementation of relevant Treaty and Protocol provisions in a comprehensive draft OSI Operational Manual. In order to support the draft OSI Operational Manual and within the framework of the quality management system of the CTBTO, the OSI Division is developing a comprehensive set of subsidiary documents that includes manuals, standard operating procedures and work instructions covering OSI processes, procedures and responsibilities. This documentation provides detailed guidance to the inspection team in the field and to supporting staff at headquarters.

The inspection team functionality and field team functionality concepts are practically implemented using a map based platform called the Geospatial Information Management for OSI (GIMO). This system is used for all methodological steps of the search logic, from posing questions of interest in search zones in the inspection area to the development, prioritization, resourcing and conduct of missions to answer those questions, as well as reporting findings. GIMO also provides a tool for the inspection team to acquire, integrate, disseminate and interrogate data in a multidisciplinary manner, thereby supporting the conduct of an efficient and effective inspection.

At the centre of an OSI will be a team of up to 40 inspectors, including experts in the application of OSI techniques listed in the Protocol to the CTBT, Part II, paragraph 69, “Inspection Activities and Techniques”, as well as ancillary functions such as health and safety, operations and logistics support. The inspectors will be able to use a range of increasingly intrusive techniques to collect facts and information within a designated inspection area of up to 1000 km². Following the conclusion of an inspection, the inspection team will report its findings to the Director-General of the CTBTO.

In preparation for EIF, the CTBTO is continuously developing, testing and refining a detailed inspector training programme. It has developed a diverse roster of approximately 170 ‘surrogate’ inspectors comprising experts nominated by States Signatories and staff of the organization. The training programme includes face-to-face and distance learning, computer based and hands-on technical equipment training, and courses on cross-cutting elements such as health and safety, operations support and logistics, methodologies, reporting, soft skills and leadership. The OSI training programme includes multiple opportunities for field practice and concludes with one or more major field exercises.

The Technology Support and Training Centre (TeST Centre) in Seibersdorf, near Vienna, serves as a storage, maintenance, calibration and equipment testing facility primarily for OSI as well as the other technical Divisions of the organization. It also serves to support the conduct of training and field exercise activities. The TeST Centre includes a dedicated and secure protected area for the storage of OSI equipment, together with the infrastructure needed to facilitate its rapid deployment for OSIs upon EIF.

The Director-General and the inspection team in the field will be able to rely on the Operations Support Centre (OSC), an ad hoc supporting entity whose role is to support and assist the inspection team during the preparation, conduct and reporting of an OSI. The OSC will coordinate activities within the organization during the launch of an inspection, provide technical and operational support to the inspection team throughout its deployment and assist the Director-General in fulfilling his/her OSI related responsibilities in accordance with the Treaty. In 2019, the Commission inaugurated a new, custom designed Operations Centre at its headquarters at the Vienna International Centre, within which the OSC will operate, when required. 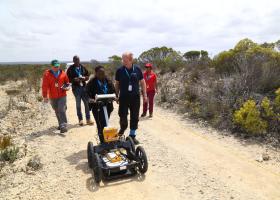 The Comprehensive Nuclear-Test-Ban Treaty (CTBT) lists specific techniques that can be applied during an on-site inspection.

The Comprehensive Nuclear-Test-Ban Treaty (CTBT) lists specific techniques that can be applied during an on-site inspection.