The traditional name of the Queen Charlotte Islands where hydroacoustic station HA02 is located is Haida Gwaii or the "Islands of our People", referring to the “vanished civilization” of the indigenous Haida people who fell victim in large numbers to disease at the time of first colonial contact. The islands were visited in 1778 by Captain James Cook and surveyed by Captain George Dixon in 1787, who named them after his ship and Queen Charlotte, wife of the British King George III. The archipelago lies off the northwest coast of British Columbia, Canada and consists of two main islands, Graham Island in the north, Moresby Island in the south, plus roughly 150 smaller islands with a total landmass of 10,180 km². The islands are separated from the Canadian mainland by the Hecate Strait. Vancouver Island lies to the south, while the US state of Alaska lies is to the north.

Having escaped much of the glaciation of the last Ice Age and remained isolated from the mainland, the archipelago has developed into what some now call the ‘Galápagos of the North’, a unique biological zone with many endemic animals and plants. Its climate is moderated by the Kuroshio Current and features considerable precipitation and relatively mild temperatures year round.

The Van Inlet site is located at about 1,000 m above sea level and thus often in the clouds and snow-covered in winter. The new Dawson Inlet facility is only 40 m above sea level in a fjord that is sheltered from direct ocean seismic 'noise' but simultaneously exposed to ocean traveling acoustic waves. Background and cultural noise are reduced due to the absence of significant human acivity in the area. Learn more about how the hydroacoustic technology works.

At both of its sites, the hydroacoustic station employs identical so-called equipment that uses to detect that are converted to when they hit the shore of an island. The Geological Survey of Canada has been granted a scientific reserve immediately adjacent to the Canadian Coast Guard property at the northern Van Inlet station. The reserve encompasses the current seismic vault—that is, a small, secure building erected around the seismometer that protects it and its associated equipment from theft, weather, wild animals, etc.

The station design and installation plan was submitted to the Preparatory Commission for the Comprehensive Nuclear-Test-Ban Treaty Organization in March 2003. Construction of Dawson Inlet and parts of Van Inlet began in June 2004. An International Monitoring System (IMS) certification team visited both stations in March 2005 and tests were run, including noise measurement, calibrations tests, anti-tamper tests and (GPS) tests for each of the stations.
was also evaluated in November 2006 and the result was 100%, exceeding the 97% required threshold. Thus, this station was recommended for, and received, official on 20 December 2006. It was the ninth station of the hydroacoustic network, which consists of a total of 11 stations, to be certified.Canada hosts IMS monitoring facilities representing all four verification technologies: in addition to hydroacoustic station HA02, three primary seismic stations, six auxiliary seismic station, one infrasound station, four radionuclide stations and one radionuclide laboratory. 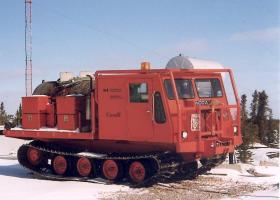 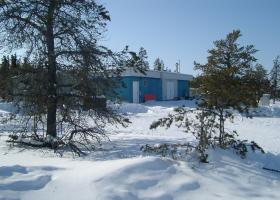 The radionuclide station RN16 is located on the periphery of Yellowknife only a few hundred meters from the Geological Survey of Canada (GSC) where the IMS primary seismic station PS09 has also been established.