Primary Seismic station PS23 is located near the town of Makanchi in the Alakoskaya geological depression near the southern tip of Kazakhstan. It is a seismic array —that is, a spatially distributed set of seismometers all transmitting their outputs to and recorded at a Central Recording Facility (CRF). The CRF is located about 25 km from the array center in terrain of open rolling hills and numerous rock outcroppings at an average elevation of 600 metres.

Learn more about how the seismic technology works.

Makanchi is located in eastern Kazakhstan, south east of the capital of Astana and due south of the former Soviet nuclear testing site of Semipalatinsk, where the CTBTO’s 2008 on-site-inspection exercise, Integrated Field Exercise 08 (IFE08), was conducted in September 2008.  Participants in IFE08 experienced Kazakhstan's extreme climate where average temperatures range from night-time lows of  -45ºC in winter to daytime highs of +40ºC in summer. Winters are generally cold, clear and relatively dry. Snowfall averages 60 days per year and can even occur in summer.

The seismic array at Makanchi is part of Kazakhstan’s National Seismic Network. This station was opened in 1970 by the Soviet Union for the express purpose of monitoring nuclear tests at the Semipalatinsk nuclear test site, which is a few hundred kilometres away. In 1994, it was transferred to Kazakhstan’s National Nuclear Center. The special ambient seismic noise characteristics of PS23 are well-known in IMS circles. Because it is so far inland, distant from major human settlements and traffic and protected from background noise, Makanchi is an ideal site for an IMS seismic station.

In 1996, the existing seismic station was designated as the location of one of the 50 primary seismic stations of the IMS. In 1998 it was re-situated 25 km east of the old site. Construction of a regional array with 11 physical elements over an aperture of approximatively 3.7 km began in November 1999. Am array installation and upgrade were completed in mid-summer 2001. Data availability measured in October and November 2001 and was found to meet the 98% requirement. By the end of 2001, PS23 was shown to have met all the minimum requirements for an IMS Primary Seismic station. The station was thus certified on 30 January 2002, the 12th primary seismic station to be included into the IMS network.

Kazakhstan has a an impressive record in the field of nuclear non-proliferation and disarmament, having renounced its stockpile of nuclear weapons and closed the former Soviet Union nuclear test site at Semipalatinsk upon gaining independence in 1991. In addition to primary seismic station PS23, Kazakhstan hosts three auxiliary seismic and one infrasound station of the CTBT's International Monitoring System (IMS). 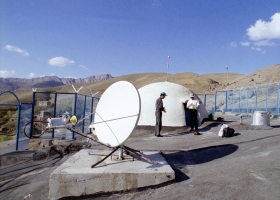