Wonju is a city in Gangwon province, in the Republic of Korea. With a population of almost 300,000 and an area of almost 870 km², it is now the largest city in this province. Located approximately 120 km east of Seoul, Wonju is home to three major universities—Halla, Sangji and Yonsei—which draw many students from Seoul and elsewhere. Wonju was also a battle site in the Korean War.

Wonju is located on the west side of the Republic of Korea and on the southern half of the Korean Peninsula, which juts out from the far east of the Asian land mass. The Democratic People's Republic of Korea (DPRK) is the only country that shares a land border with the Republic of Korea. The country is mostly surrounded by water and has 2,413 km of coastline along its three seas. To the west is the Yellow Sea, to the south the East China Sea, and to the east the Sea of Japan. At 98,480km², the Republic of Korea is slightly larger than the American state of Indiana. Overall, the Republic of Korea is quite mountainous, a fact that had to be taken into consideration in selecting the site for the International Monitoring System (IMS) primary seismic station PS31. The Korean peninsula’s terrain is characteristically rugged and steep, consisting largely of Precambrian rock, such as granite gneisses and other metamorphic rocks.
Unlike nearby Japan, Korea presents a stable landmass with no active volcanoes and only rare earthquakes. However, it was not always so. Nearly 1,800 earthquakes are recorded in various historical documents of past dynasties from the year 2 AD to 1907. Because of its proximity to the “Ring of Fire” and the Circum-Pacific Earthquake Belt, seismicity in Korea is much stronger than in neighbouring Manchuria, but weaker than in Japan. The Republic of Korea is a comparatively stronger seismic area than the DPRK, and the west half of the Korean Peninsula has shown stronger seismicity than the eastern half. This is why the region was chosen as the site of the original seismic station.

In 1971, the Republic of Korea’s Ministry of National Defense made an exclusive use land grant for Detachment 452’s Wonju array sites to the United States Forces in Korea. The original station had been established in 1966 near Chunchon, about 40 miles north of the current location.

PS31 has a rather high level of seismic background ‘noise’ caused by human activity, especially by agricultural work close to array elements’ location. It is nonetheless  very important due to its proximity to the Democratic People’s Republic of Korea (DPRK): it is just 130 km from the border. PS31 played a special role in the DPRK announced nuclear test on 9 October 2006: it was the closest IMS station to the DPRK nuclear test site and provided precise seismic data on the event. For the initial station commissioned in June 2002, each array element consisted of an enclosure mounted on a seismic borehole that was drilled into bedrock at varying depths. Most of the sites used commercial power.

A station upgrade was completed in February 2005. The station was connected to the International Data Centre (IDC) Testbed for transmission of data in September 2006, just before the DPRK announced it had conducted a nuclear test. After the station had performed with reasonably high data availability and the data had been tested successfully in IDC processing, the station was certified as meeting all requirements on 31 October 2006. Learn more about how the seismic technology works. 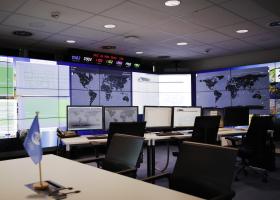 Located in the CTBTO’s headquarters in Vienna, the IDC collects, processes and analyses monitoring data from more than 300 facilities in the International Monitoring System (IMS), and distributes them to Member States in both raw and analysed form.

Located in the CTBTO’s headquarters in Vienna, the IDC collects, processes and analyses monitoring data from more than 300 facilities in the International Monitoring System (IMS), and distributes them to Member States in both raw and analysed form.