Punta Arenas, which means "Sandy Point" in Spanish, is the southernmost city of its size in the world. With a population of 120,000, it is also the most prominent settlement on the Strait of Magellan and is capital of the region of Magallanes y la Antártica Chilena. Punta Arenas is the third largest city in the Patagonian Region and is located only about 1,400 km from the coast of Antarctica. The Magallanes region is considered part of Chilean Patagonia. Magallanes is Spanish for Magellan, the explorer who, while circumnavigating the Earth on behalf of Spain, passed close to the present site of Punta Arenas in 1520. The city of Punta Arenas, founded in the mid-1800s, grew into a centre for commerce, culture and society that has spread its influence over the entire region.

Temperatures in Punta Arenas are greatly moderated by the proximity to the sea, with average lows in July close to ?1°C (31°F) and highs in January of 14°C (57°F). The region is also quite dry, with only 43 mm of rain during its wettest month of May. The city is also known for its strong winds of up to 130 kmph, which are most powerful during the summer, when ropes are spanned in the downtown area to assist with unique wind currents created by the buildings. In September 2000, Punta Arenas was the first significantly populated city in the world to be directly affected by the hole in the ozone layer, exposing its residents to potentially damaging levels of ultraviolet . The World Meteorological Organization at that time reported "near total destruction" of the ozone in some layers of the stratosphere.

The Punta Arenas for RN18 was performed by the Chilean Nuclear Energy Commission (CCHEN) in July 2000 and the site was accepted in September. CCHEN also carried out the infrastructure preparations while Veridian Systems (USA) were responsible for the installation of the station. The installation was completed by January 2003. Learn more about how the radionuclide technology works.

RN18 is located on the campus of the Universidad de Magellanes in Punta Arenas, Chile. Although the original Treaty location was at the seashore, the current location is 20 km away and was approved as most suitable for installation. RN18 is an automatic Radionuclide Aerosol Sampler and Analyzer (RASA) station system. It is a fully integrated and automated system for monitoring airborne whose air sampler has an airflow rate of 1,050 m³ h-1 (i.e. the volume of air per unit of time) with the air sampler inlet on the roof of the dedicated building. The meteorological system, also located on the roof and connected to the RASA computer system, measures precipitation, air temperature, humidity and pressure, wind speed and wind direction, using an ultrasonic sensor. The operation software controls all station equipment, including state of health, meteorological and tamper sensors.

The certification visit took place in spring 2003.  During the visit, all technical information submitted was reviewed and discussed, the station’s facilities were inspected, and numerous technical tests were performed. After a thorough evaluation of the data received via the Global Communications Infrastructure (GCI) for a period of several months, the station was found to meet the yearly goal of 95% . RN18 at Punta Arenas, was therefore formally certified on 22 August 2003 as the 17th of 80 planned radionuclide stations around the world that are included in the ’s .
All four verification technologies are represented in Chile, which hosts one other radionuclide station, one hydroacoustic station, two infrasound stations and two auxiliary seismic stations. 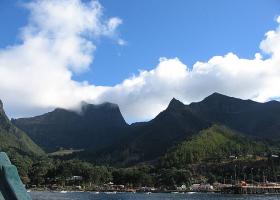 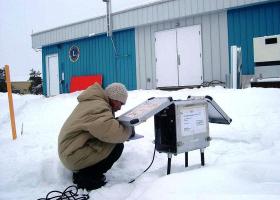