Beyond its core purpose of detecting nuclear explosions, the CTBT’s International Monitoring System (IMS) produces a treasure trove of data that can be put to wider civil and scientific use, from helping to save lives in a tsunami or tracking potentially harmful fallout from a nuclear accident to expanding our knowledge of the Earth and the natural world.

Here are some of the many ways that CTBT data are generating wider benefits for humanity.

By identifying earthquakes or other seismic events that could cause a tsunami, CTBT data can help strengthen Member States’ ability to issue faster and more precise public safety warnings. Following the catastrophic earthquake and tsunami off the coast of Sumatra, Indonesia, in December 2004, the CTBTO was mandated to provide monitoring data directly to national tsunami warning centres.

Data from more than 160 seismic and hydroacoustic stations in high tsunami risk areas are now sent in near-real time under a total of 19 tsunami warning agreements with 18 countries. During the huge March 2011 earthquake and tsunami in Japan, authorities there said IMS data helped them issue timely warnings that allowed many people to escape to higher ground.

IMS stations can contribute to the international response to a nuclear emergency, such as an accident at a nuclear power plant, by tracking the movement of harmful radionuclides. Following meltdowns at the Fukushima Daiichi plant caused by the March 2011 earthquake and tsunami in eastern Japan, the IMS started to detect radioactive particles and noble gases emitted by the damaged reactors.

While the levels detected were far below those harmful to human health, the IMS showed it could track radioactive materials from nuclear accidents quickly and accurately, and correctly predict their dispersion using atmospheric transport modelling. Member States were able to provide reliable information to concerned populations, and the experience led to the CTBTO joining the Inter-Agency Committee on Radiological and Nuclear Emergencies (IACRNE), which facilitates and coordinates inter-agency cooperation in case of such an emergency.

Real-time detection of a volcanic eruption can help to make civil aviation safer. Many of the world’s 600 active volcanoes are close to busy air routes, and eruptions can make the airspace hazardous in a matter of minutes as large ash plumes can cause jet engines to malfunction or even stall. In early 2010, for example, the eruption of the Icelandic volcano Eyjafjallajökull led to the closure of airspace over many parts of Europe. IMS infrasound stations can detect the ultra-low frequency sound waves emitted by volcanic eruptions and help provide warnings in real-time. The CTBTO is collaborating with the Volcanic Ash Advisory Centre in Toulouse, France, and other partner Volcanic Ash Advisory Centres under the patronage of the World Meteorological Organization, the International Civil Aviation Organization and the Atmospheric dynamics Research InfraStructure in Europe community.

IMS data can also help to cast light on plane crashes and other major accidents: infrasound stations may pick up an explosion, seismic stations could detect the impact of a large aircraft on the ground and hydroacoustic stations can potentially detect the impact of a plane crashing in the ocean. Incidents such as the collision in 2003 of two F16 aircraft during a military exercise in Belgium, and the 2009 crash of a FedEx cargo plane at Narita International Airport, Japan, were detected by IMS infrasound stations up to hundreds of kilometres away. Member States asked the CTBTO to provide technical assistance and data to aid the search for Malaysian Airlines Flight MH370, which disappeared in March 2014.

IMS data has even been used to help in the search for a missing Argentinian submarine, the ARA San Juan, which was lost in the southern Atlantic in November 2017. Two hydroacoustic stations detected an unusual signal in the vicinity of its last known position, and details were made available to the Argentinian authorities to support the search operation. The wreckage of the submarine was found a year later near the position located by the IMS.

Researchers can access selected IMS data to better understand the natural world, including the Earth’s core, marine life, climate change and meteor blasts. Data from the hydroacoustic network have been used to improve weather prediction, to throw light on the break-up of ice shelves and the creation of icebergs, and to analyse the migration patterns of whale populations. In 2021, research based on CTBT data led to the identification of a new colony of pygmy blue whales, which have eluded discovery for decades despite their massive size. Measurements of beryllium-7 captured by the radionuclide network have been used to predict the onset of the monsoon rains in India.

When a meteor exploded over Russia’s Ural mountains on 15 February 2013, the blast was detected by 20 IMS infrasound stations, one of them 15,000 km away in Antarctica. The infrasound data can help scientists learn more about the altitude, energy released and how the meteor broke up. The scientific community will be able to source an even greater wealth of data from Tonga’s Hunga Tonga-Hunga Ha’apai volcanic eruption in January 2022, the biggest event ever recorded by the IMS infrasound network, which picked up acoustic waves circumnavigating the globe in both directions.

Non-verification uses of CTBTO data are prominently discussed at the biennial CTBT Science and Technology conferences, which attract scientists and experts from a broad range of relevant disciplines. The exchange of knowledge is a two-way street that also helps experts at the CTBTO to hone their skills in detecting nuclear explosions. A deepened understanding of the Earth’s crust, for example, helps scientists analyze the propagation of seismic waves from a nuclear explosion. Similarly, insights into atmospheric and meteorological phenomena can enhance knowledge on the propagation of infrasound waves or the travel paths of radionuclide particles and noble gases.

The CTBTO’s virtual Data Exploitation Centre (vDEC) provides scientists and researchers from many different disciplines and from around the globe with access to data, free of charge, to conduct research and publish new findings.

Find out more about how to request data through vDEC. 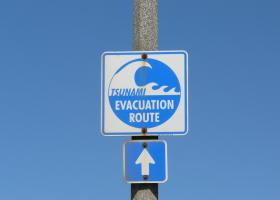 As well as detecting nuclear explosions, the CTBT’s unique global monitoring system can also identify earthquakes or other seismic events that could cause a tsunami, helping Member States to issue faster warnings. 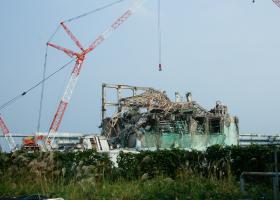 IMS stations can contribute to the international response to a nuclear emergency by tracking the movement of harmful radionuclides. 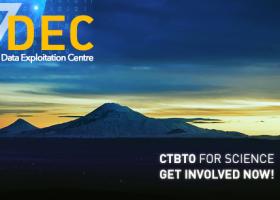 The virtual Data Exploitation Centre provides scientists and researchers from many different disciplines and from around the globe with access to our data to conduct research and to publish new findings.